Pray Whether You Need To or Not

It was the Monday exactly one week after Labor Day, 2000, and I had not been able to ride on my favorite bicycle trail, the one that goes from Milwaukee and Devon Avenues in Niles, Illinois to the Chicago Botanical Gardens in Glencoe, Illinois, a trail through a heavily forested area that is approximately a 46 mile round trip from my house to the end of the trail and back. As I was driving back that Monday morning from my 8 a.m. Latin class, I was delighted to hear that it would be a nice hot day and there would be only overnight showers. Since I had the rest of the day free, I changed into my bicycle attire and hit the road. By 12:30 or so I had reached the end of the trail and was enjoying a nice little lunch when the “overnight showers” arrived all of a sudden.

They started as a nice, gentle r 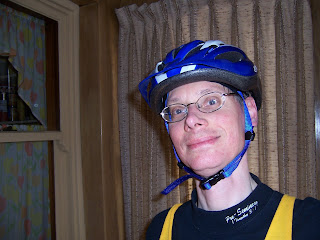 ain, but I made the fortunate decision to return sooner rather than later. Soon the showers were no longer just showers, just as they were not occurring overnight. They were a full fledged thunderstorm, a St.-Anne-I-will-become-a-monk kind of storm. Although I have never been particularly bothered by storms before or since, I’ve also never been outside when I’ve repeatedly counted less than a second between the flash of lightning and the peal of thunder. I came across two trees felled by lightning bolts and lying on the trail. The bike path was abandoned and I was about the only person on it, even though it had been teeming with people earlier. What is worse, the temperature had dropped from the low 90’s to somewhere in the 50’s and I was soaking wet. If I didn’t get fried by a lightning bolt, I would die of hypothermia. Either way, I would die alone on the trail in a metropolitan area of 8 million people.

I eventually came to a part of the trail that ran near a park and I sought shelter by the restrooms until the lightning died down. Then I pedaled my way back to home, some ten miles away at that point. Of course, I was praying the whole time and I said my prayers of thanksgiving once I got home and threw myself into a hot bath to warm up.

And you might think that that was the end of the matter. Sure, I would always remember the event with gratitude to God for His deliverance, but that would be all. But in the spring of the following year I discovered something even more profound. I was in the middle of Lent and we were using the Litany as part of our Lenten midweek services. We came to the line, “From lightning and tempest…Good Lord, deliver us.” And I was struck by how the Lord had indeed heard my prayer. 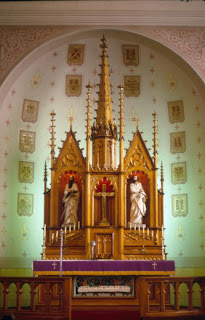 I had prayed the Litany many times previously, but I had never put much emphasis on the petitions for deliverance “from sudden and evil death.” It isn’t that I was careless in my prayers. I truly meant what I prayed. But I thought that that petition was about as directly applicable to me as the request that God would “preserve all women in the perils of childbirth.” I wasn’t going to die in childbirth or in a thunderstorm, I had thought. Those perils might have loomed large for peasants in the Middle Ages, but not for a modern person like myself. Or so I had thought. But then I discovered that I faced dangers I could not foresee. Even when I thought I didn’t need this particular kind of prayer, I really did. For those many years that I had prayed the Litany and similar prayers, I was asking God to keep me safe on that one day I would face that terrible storm.

The Monday after Labor Day in 2000 was September 11. I need not explain what happened a year later. Just as I was surprised by an unexpected storm in 2000, so the whole nation was surprised by an unexpected war in 2001. For a quarter century it looked as if our prayers for deliverance “from war and bloodshed, from sedition and rebellion” were superfluous or only remotely needed. But since then we have come to realize that those are necessary prayers. And so we pray, whether we feel we need to or not.

I had written about these things many years ago to my parishioners, but early in May there was a confluence of three events: I took my first bike ride for the season, Osama bin Laden was killed, and I recalled how our synodical president had urged us to pray the Litany during Lent. The lesson remains.
Posted by James Kellerman at 3:03 PM No comments:

Franklin Graham doesn’t believe that Jesus is truly God. How can I say that? He most certainly professes faith in the divinity of Christ. The problem, though, is that he believes in Christ’s divinity in theory, but not in practice.

This became apparent when he gave a recent interview to Christiana Amanpour, in which he stated that the way that everyone could see Christ’s return is to watch it on a cell phone or laptop or the like. He took the Scriptures seriously enough to believe that everyone will see the return of Christ. But rather than believe that Christ could accomplish this because He is truly God, Graham cast about for a technological solution.

Of course, he couldn’t solve the problem by technology. Vast numbers of people, even in the United States, are too poor or too isolated to have cell phones or internet access. Even those of who have cell phones and computers leave them behind or turn them off for periods of time. Thus, I didn’t find out until this morning that Osama bin Laden had been killed, even though the news was broadcast far and wide all night long. Had I been camping or hiking, it would have been even worse, since I often cannot get cell phone reception, let alone internet, in the mountains. If God has to use the internet in order to let everyone see Christ’s return, then months will go by before everyone will see Him—in direct contradiction to our Lord’s promise that all will see Him instantly without need of anyone prompting them (Matthew 24:23-27). And so the people of the 1960’s were right, after all: the revolution will not be televised.

But why was Franklin Graham forced to look for a technological solution, however lame it might be? He was following a trajectory of thought that goes back to Ulrich Zwingli that has influenced most of Protestantism with the exception of Lutheranism. This is often called “Reformed” theology, and although that title usually applies only to Presbyterians, Dutch Reformed, and similar groups, their view of Christ is widely shared by rival Protestants such as Arminians (e.g., Methodists), who differ sharply with the Reformed on other issues such as conversion and election. If you were to ask those with a Reformed view of Christ whether He can be with us always (Matthew 28:20), they would tell you, “No. His human nature is locked up in heaven, although His divine spirit can be with us.” Does our Lord know all things (John 16:30; 21:17)? “No. In His divine nature He does, but His human nature is incapable of knowing all things, since (like any human being) He has a finite mental capacity, even if He is highly intelligent.” Can Jesus do all things, even the miraculous (Luke 18:27; Colossians 1:16-17)? “No. The man Jesus can do many great things, like one of the saints of old, only with even greater powers. He can do wonders but is not omnipotent.” Does His blood have the divine power to cleanse us from our sins (1 John 1:7; Colossians 1:22)? “No. His divine spirit can forgive us, but His human nature does not have that power.” In short, does the fullness of the Godhead dwell in Christ in bodily form (Colossians 2:9)? “By no means. Finite man is not capable of the infinite God. The human Jesus is incapable of bearing the fullness of the deity of the Son of God.”

Now you might well wonder if the Reformed believe that Jesus’ humanity is so deeply separated from His divine nature, do they really believe in the incarnation—that the Son of God became flesh and thus Jesus Christ is true God and true man in one person? That is a good question. The best answer I can give is that in theory they truly believe in the incarnation and in Christ’s deity, but in practice they do not. It is no surprise that where a Reformed view of Christ predominated, Unitarianism and other movements have arisen that denied Christ’s deity altogether. They simply denied in theory what the Reformed had been denying all along in practice.

It would be far better, though, if Franklin Graham and others could simply accept that Jesus is God’s Son—and He won’t need a microphone for His voice to be heard or a TV screen for Him to be seen.

James Kellerman
As a person who is devoted to sound Lutheran theology and who has devoted his life to studying and teaching the Greek and Latin classics, I am particularly interested in the interaction between theology and culture. For me, culture is not simply a code word for "politics," and most of my conversation will avoid that realm since it is adequately covered elsewhere. Nor am I interested exclusively in popular culture, as is so often the case with those in the church who claim to be "reaching the culture." Culture is more than TV programs or great works of literature. It is more than our history or our shared customs and values. And it is all worth exploration, especially from a theological point of view.